Company Overview
Kovatch Mobile Equipment Corp. (“KME”) is a North American leader in the manufacture of fire trucks and other specialty vehicles including aircraft re-fuelers, oil and gas delivery, and various other commercial vehicles. The company manufactures vehicles for municipalities throughout the U.S. and Canada, with customers ranging from small volunteer fire departments to some of the largest fire departments in the world. KME also manufactures vehicles for commercial customers, foreign end users, the U.S. military and other federal entities. KME and its predecessors have operated out of Nesquehoning, PA, since 1946, and it has grown to now employ more than 900 people with operations in five states. The Kovatch family owned and operated the business for three generations.

Situation
Throughout the 2000s, KME undertook considerable measures to strengthen its competitive position in the fire apparatus market, which included investment in the company’s nationwide dealer/sales representative network, and heavy investment in new and existing product development. As a result of these investments, KME experienced a sharp increase in market share that has been sustained for several consecutive years following the 2008/2009 recession. As the company worked toward adapting production to meet rapidly expanding demand, the Kovatch family came to the realization that the business had quickly grown to the point where additional outside resources were necessary to allow the company to reach its full potential. With this in mind, the family made the decision to seek a partner who would be capable of supporting the company as it moves into the next phase of its growth. An additional key consideration of the Kovatch family was selecting a partner who intended to retain existing manufacturing operations, the bulk of which are located in Nesquehoning, PA, where the business has become the cornerstone of the local economy.

Solution
Griffin Financial Group was engaged by KME as its exclusive investment banker to seek a buyer or partner for the company. After considering the shareholders’ goals and concerns and conducting extensive research on the company and its industry, Griffin managed a competitive sale process that included private equity buyers and a select list of potential strategic buyers. This process yielded numerous purchase offers from which KME ultimately selected REV Group, a diversified specialty vehicle manufacturer and portfolio company of American Industrial Partners. The addition of KME to REV Group’s family of companies brings to bear REV Group’s extensive financial and operational resources, providing KME with what the family believes to be its best path forward to reach new heights in the fire apparatus industry. 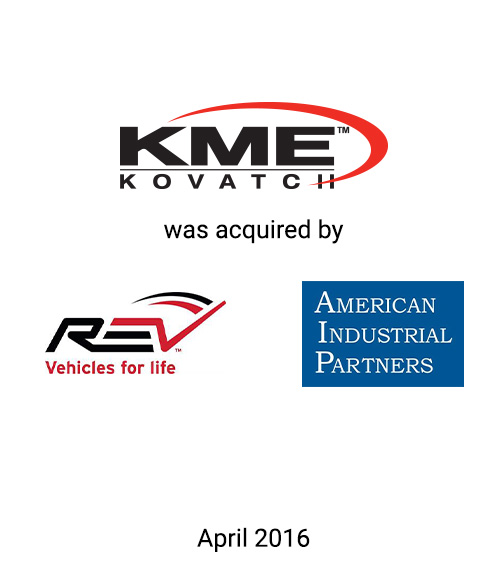