Company Overview
GVM, Inc. and its wholly owned subsidiaries Independent Ag Equipment, Inc. (“IAE”) and GVM West, Ltd. (collectively, “GVM,” the “Company”), debtors-in-possession, is a manufacturer and distributor of agricultural equipment and supplies throughout North America. The Company is headquartered in Biglerville, PA, along with its manufacturing facility and in-house distribution business, which is augmented by additional distributor locations in Peru, IN, Sikeston, MO, and Bellevue, OH.  Founded in 1977, GVM has established itself as one of the most recognizable brand names within the industry with a reputation for producing quality, innovative equipment. The Company’s high-quality products including its flagship Prowler, are priced at a premium relative to those of competitors, and are designed with a focus on generating industry leading ROI over the life of the purchase for its end users. Furthermore, sales and after-market service is managed through a non-exclusive distribution network including multiple in-house distributor locations and third party distribution partners strategically located within key regions (i.e. agricultural states) of the U.S – Great Plains, Southeast (South and Mid-South), Great Lakes, and Mid-Atlantic, as well as parts of Canada – Quebec, Ontario, and New Brunswick.

Situation
After a relatively strong performance through the 2008/2009 recession and the years immediately following, the Company invested heavily in expanded production (opened a second plant) and new product development (introduced two major new product platforms). Beginning in 2013, falling commodity prices led to a sharp decline in farming operators’ profitability, which in turn, negatively impacted demand for GVM’s products and consecutively led to significant excess capacity and overhead. The Company also effectively lost its distribution partners and largest customer in two key regions during the same period. The aforementioned dynamics caused the Company to suffer a protracted decline in sales and profitability, which only exacerbated the operating challenges by further constraining liquidity.

Solution
In July 2019, the Company filed a Chapter 11 bankruptcy proceeding with the intention of pursuing a sale of a substantial portion of its assets pursuant to section 363 of the Bankruptcy Code. Griffin was engaged by the Debtor as its exclusive investment banker to run a sale auction process, which resulted in a highest and best bid from Liquid Finance Company, LLC. The transaction closed on May 28, 2020 despite the challenges introduced by the COVID-19 pandemic.

For more information on this transaction, please contact Griffin’s Thomas G. Whalen, Senior Managing Director, at 610.205.6115, Glenn S. Bernabeo,  Senior Managing Director, at 610.205.6034, or Thomas A. Hill, Senior Vice President, at 610.478.2034. For more information on Griffin’s services in general, contact any one of our investment banking professionals. 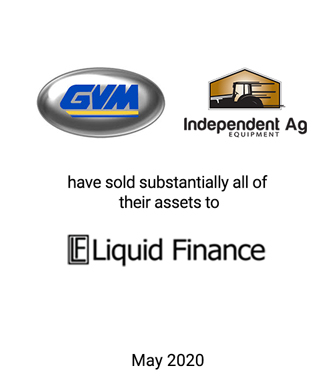