Mascoma Mutual Financial Services Corporation is a $2.2 billion asset mutual holding company headquartered in Lebanon, NH, and parent of Mascoma Bank, founded in 1899. The bank has 28 full service offices from Burlington, VT, to Keene, NH, and loan production offices in Burlington, VT, Portland, ME, and the Connecticut River Valley. Mascoma has been extremely successful growing its business organically, both in its home markets and in expansion markets in Burlington and Portland.

Following the onset of the COVID-19 pandemic, Mascoma was active in the Paycheck Protection Program for both existing and new customers, building its franchise through customer service and attentiveness to its clients and communities in their time of need.

The Company’s existing subordinated debt issue, placed in December 2015 with a higher coupon of 6.50%, is able to be redeemed at par beginning on January 1, 2021.

The new capital will replace higher coupon existing subordinated debt, extend the maturity of its debt and provide for growth capital as Mascoma takes advantage of the impact it has had in its communities by being an attentive partner to its customers during the pandemic-driven shutdown. Mascoma was able to access the capital markets during a period of significant economic distress, while the interest rate environment was advantageous and demand for the product was strong. Subordinated debt allows the strong and active Bank to fund its core balance sheet growth while retaining its mutuality, which is a clear competitive advantage for the Company.

Griffin Financial served as financial advisor and exclusive placement agent in the placement of the $25 million of 5.375% fixed-to-floating rate subordinated notes with institutional investors.

For more information, contact Richard L. Quad, Senior Managing Director and Head of Griffin’s Financial Institutions Group, at 646.254.6387, or Jordan S. Winick, Vice President, at 610.205.6355. For more information on Griffin’s services in general, contact any one of our investment banking professionals. 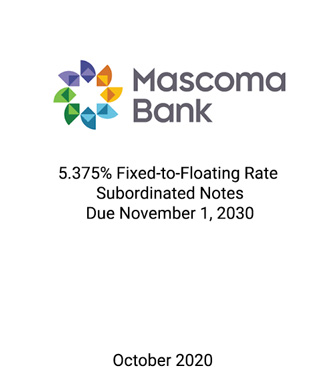