Situation
Mascoma Mutual Financial Services Corporation is a $1.4 billion asset mutual holding company headquartered in Lebanon, NH, and parent of Mascoma Savings Bank, which was formed and has been mutually owned since 1899, with 27 full service offices, a loan production office and a mortgage office, serving retail customers and businesses in New Hampshire and Vermont.

After purchasing Connecticut River Bank and Centurion Insurance in 2014, Mascoma saw its regulatory capital ratios decline, remaining comfortably above well capitalized standards but below the Company’s traditional conservative capital position. The strong earnings of the Company would rebuild its capital levels over time without an offering, but given the Company’s strong organic growth, Mascoma has recently reduced its balance sheet and begun participating out new loan business in an effort to rebuild capital in the near term.

Solution
On December 21, 2015, the Company issued $15 million of subordinated notes to accredited investors, with Griffin Financial Group serving as placement agent. The subordinated notes bear interest at a fixed rate of 6.50%, are non-callable for five years, mature on January 1, 2026, and qualify as Tier-2 regulatory capital at the holding company. The Company anticipates down-streaming the proceeds to Mascoma Savings Bank to fund core balance sheet growth.

Measures of Success
Subordinated debt provides Mascoma with low cost Tier-2 regulatory capital at the holding company, which becomes Tier-1 common equity when down-streamed to the bank, and provides time to organically rebuild core capital through earnings while maintaining its strong growth. As a mutual institution, the subordinated debt provides for regulatory capital that can allow Mascoma, as a strong performing mutual, to continue its growth trajectory without having to access the equity capital markets through a conversion. Mascoma was able to access the subordinated debt market while the interest rate environment and demand for the product were both still favorable to investors, giving the Company competitive execution in a market that is slowly becoming more challenging. 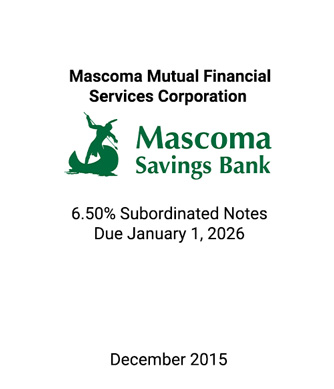