Guaranty is a strong and consistent performer and had strong credit quality throughout the COVID-19 pandemic. At December 31, 2020, NPLs to loans were 0.12% and the allowance was 1.14% of loans. Net charge-offs were 1 basis point of total loans in 2020. Loan modifications had almost entirely returned to full paying status by year end 2020. Guaranty was an active PPP lender during the pandemic, serving both new and existing clients, which created solid momentum headed into the recovery.

Through attentive customer service during the crisis, market expansion and the hiring of new lenders, Guaranty sees growth opportunity as its markets recover from the pandemic. At the same time, the Company has a significantly larger balance sheet as a result of the downturn, as customers have parked stimulus funds at the bank and paused significant spending while the economy recovers, putting a strain on regulatory capital ratios.

Not unlike banks of its size, given the lack of liquidity and the pink sheet nature of Guaranty stock, long term shareholders may from time to time seek liquidity in their investment that would not otherwise be satisfied in the market, and the Company would like to have additional capital capacity to potentially assist with the repurchase of shares periodically as needed.

On March 23, 2021, the Company issued $13 million of fixed-to-floating rate subordinated notes to accredited investors, which was increased in size from the originally intended offering due to strong demand. The notes bear interest at a fixed rate of 4.875% for the first five years, are non-callable for five years, mature on April 1, 2031, and qualify as Tier-2 capital at the holding company.

The Company will use $5 million of the proceeds of the offering to redeem its older subordinated  debt issue, which is currently callable and bears a fixed interest rate of 6.25%. Guaranty completed a larger new issue smoothly during the COVID-19 pandemic, expanded its number of debt holders and significantly reduced the coupon on its debt from the original issue.

Griffin served as exclusive financial advisor and placement agent in both the new and legacy offerings, and helped provide Guaranty management with the capital flexibility to both absorb core growth and act as a potential source of liquidity to legacy shareholders.

For more information, contact Richard L. Quad, Senior Managing Director and Head of Griffin’s Financial Institutions Group, at 646.254.6387, or Jordan S. Winick, Vice President, at 610.205.6355. For more information on Griffin’s services in general, contact any one of our investment banking professionals. 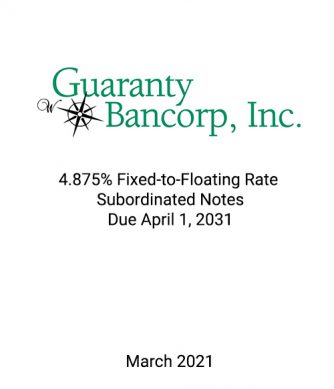