CNB has shown strong loan and deposit growth, organically, through acquisition, and through expansion into new markets, including its most recent expansion into Buffalo. CNB has grown its loan portfolio at a compound annual growth rate of 11.6% over the past five years organically, and its deposits by 4.5% per year organically as well (exclusive of acquisitions). CNB sought to take advantage of the favorable interest rate environment and raise low cost subordinated debt, which will count as Tier 1 capital at the bank level, and will be Tier 2 capital at the holding company level.

Solution
On September 30, 2016, CNB issued $50 million of subordinated notes, with Griffin Financial Group serving as placement agent. The subordinated notes bear interest at a fixed rate of 5.75% for the first five years, and 3-month LIBOR plus 455 basis points for the second five years. The notes are non-callable for five years and mature on October 15, 2026.

Griffin assisted the Company through its rating agency review, which resulted in CNB receiving an investment grade BBB- subordinated debt rating from Kroll Associates prior to the issue, which allowed for broader distribution and more favorable price execution.

Measures of Success
CNB raised low cost subordinated debt to support organic growth opportunity in its legacy markets, as well as its new markets of Columbus (which CNB entered through its acquisition of FC Bank), Cleveland (which it entered through recent acquisition of Lake National Bank), and most recently Buffalo, where the Company expanded organically. 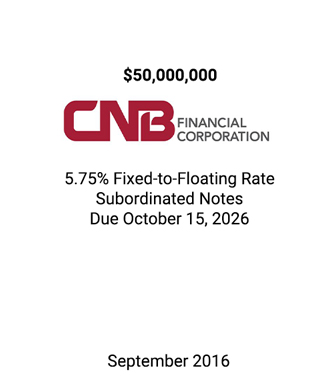