Griffin Serves as Advisor and Placement Agent to Guaranty Bancorp, Inc. in Connection with its Private Placement of Subordinated Notes

Guaranty has $7 million of preferred stock issued through the Small Business Lending Fund of the U.S. Treasury, the coupon on which will increase from 1% to 9% in April 2016. While Guaranty could have potentially redeemed the entire $7 million of SBLF preferred via internal means, they sought to take advantage of the favorable interest rate environment, as well as new small bank holding company legislation to retain additional capital to fund organic growth or other strategic initiatives versus the more adverse impact that redeeming the entire SBLF preferred via internal means would have had on the regulatory capital of its bank subsidiary.

Guaranty engaged in a detailed capital planning exercise with the assistance of Griffin Financial Group to determine its capital needs.

Solution
On July 31, 2015, the Company issued $5 million of subordinated notes to accredited investors, with Griffin Financial Group serving as financial advisor and exclusive placement agent. The Company intends to use the proceeds of this offering, in addition to other internal funds, to redeem its $7.0 million of SBLF preferred stock, subject to regulatory approval.

The subordinated notes bear interest at a fixed rate of 6.25%, are non-callable for five years, mature on August 1, 2025, and qualify as Tier-2 regulatory capital at the holding company, even though the Company currently does not report holding company capital ratios under the Federal Reserve small bank holding company policy statement.

Measures of Success
Griffin focused on a targeted list of investors with whom to place the capital and with whom the Company could receive the best execution. The private placement provided Guaranty with an attractive source of low cost capital with which to partially fund its SBLF redemption and thereby not excessively stress the capital levels at its bank subsidiary by funding the redemption entirety with internal sources. 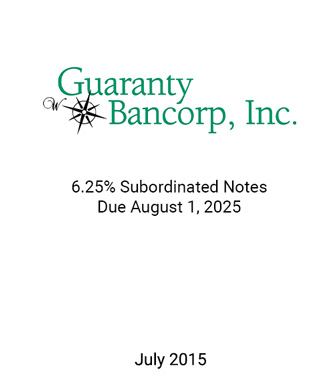