Blue Mountain Resort (“Blue Mountain” or the “Company”) is a privately-held, premier four season resort located in Palmerton, PA that serves over 500,000 visitors per year. Located in the southernmost region of the Pocono Mountains, Blue Mountain is an operating ski area on approximately 1,154 acres. The resort is just 90 minutes from both Philadelphia and New York City, and is known for Pennsylvania’s highest vertical at 1,082 ft., the most varied terrain, and some of the state’s longest runs.

Blue Mountain has been privately owned and controlled by two families since the 1960’s. After years of impressive growth, Blue Mountain’s passive shareholders were seeking liquidity for their ownership in the resort. The Company’s active shareholders were also seeking liquidity, but wanted to maintain partial ownership in the resort, and wanted to partner with a new ownership group in order to pursue additional development opportunities, such as a hotel, residential units, a hot spring spa and an aquatic park.

Griffin was engaged by Blue Mountain as its exclusive investment banker to solicit offers to purchase the Company. Griffin managed a competitive sale process involving a select group of strategic and financial buyers. The process generated multiple proposals to purchase the Company, and ultimately resulted in Blue Mountain being sold to KSL Capital Partners that also owns neighboring Camelback Resort. Blue Mountain’s passive shareholders achieved their goal of monetizing their ownership in the resort, and the Company’s active shareholders also achieved their goals of achieving liquidity while maintaining partial ownership in the resort post-transaction. 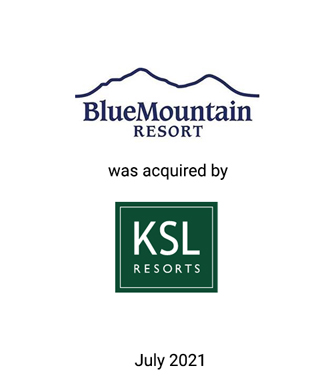