Connecticut River and its wholly-owned subsidiary, Connecticut River Bank, NA, a commercial bank chartered in 1864, provide a variety of banking services to individuals and corporate businesses along the Connecticut River Valley through 10 branches in New Hampshire in Cheshire, Grafton and Sullivan Counties as well as one branch in Windsor County, Vermont.

Under the terms of the agreement, each shareholder of Connecticut River received $18.15 per share in cash. The transaction had an aggregate value of approximately $26.7 million, or 122% of tangible book value and 33 times last twelve months earnings. The purchase price also represented a 67% premium to the stock price of Connecticut River prior to the announcement.

After considering the current banking environment with increased regulatory constraints, income pressures and challenges that lie ahead, Connecticut River’s Board sought a partnership with a larger community bank, like Mascoma, to provide the best value for its shareholders and the best future opportunities for its customers and employees. The partnering of these two banks allows them to better serve the personal and business needs of their customers with expanded financial resources and lending capacity, while maintaining a community banking approach to business.

The merger of Connecticut River with Mascoma expands Mascoma’s branch network north and south in New Hampshire and Vermont, from Lancaster and Littleton to Keene.

The transaction closed in August 2014.

Griffin Financial Group was retained by Connecticut River as its exclusive financial advisor and provided a fairness opinion to the Board of Directors. 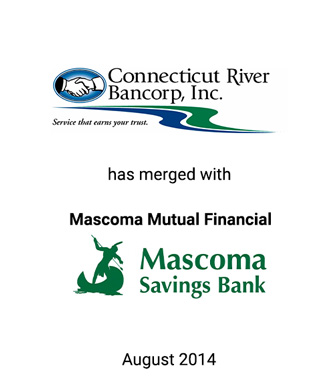