Griffin Financial Advises BankNewport in Assumption of $39.2 Million in Deposits and Purchase of Two Branch Locations From Randolph Savings Bank

Situation
BankNewport is a $1.2 billion asset mutual savings bank, founded in 1819, with 13 branches throughout Rhode Island. BankNewport sought to expand its footprint by entering Providence County, the state’s most populous and highest growth market, as well as achieving further scale in Kent County. Randolph Savings Bank agreed to consider the sale of the Rhode Island branch locations which were removed from its core market in order to focus its efforts on markets in Massachusetts and better position itself for future growth.

Solution
BankNewport assumed approximately $39.2 million in deposits and acquired two new retail banking locations in Coventry and Cranston. Following the acquisition, BankNewport had 15 branches located in Bristol, Kent, Newport, Providence and Washington counties. BankNewport ranks sixth in deposit market share in Rhode Island, and second in terms of banks whose ultimate parent is headquartered in Rhode Island. The transaction was announced on Thursday, November 7, 2013 and closed on Friday March 7, 2014.

Measures of Success
Griffin advised BankNewport through the due diligence, financial analysis, transaction structuring and review and the agreement negotiation process that resulted in BankNewport acquiring a highly sought after customer base and an enhanced market presence in some of the most attractive areas in its home state.

For more information on this transaction, please contact Richard L. Quad, Senior Managing Director and Co-Head of the Financial Institutions Group, at 646.254.6387. 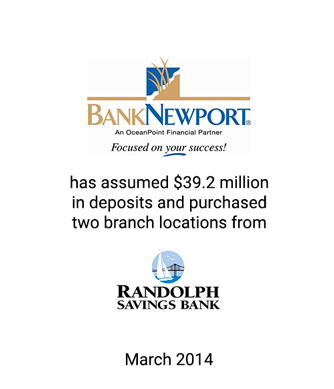