Situation
Westfield Financial Inc. (“Westfield”) is a $1.3 billion asset bank holding company and parent of Westfield Bank, which operates 11 banking offices in Hampden County (Western Massachusetts) and one banking office in Granby, Connecticut. Since its conversion to fully public status in 2006, the Company has actively managed its capital position by, among other things, an active share repurchase program. Westfield has right-sized its tangible common equity from 29.03% of tangible assets at year-end 2006 to 12.07% of tangible assets at year-end 2013 through a combination of thoughtful capital management and solid organic growth. By virtue of active capital management, which has reduced the Company’s market capitalization, as well as a significant rise in the stock market in general, Westfield is thought to be a candidate to be dropped from the Russell indices upon reconstitution in June 2014. As the Company fosters relationships with its investors, it seeks to conduct its repurchase plan in a strategic fashion, by not competing with core long-term shareholders to purchase stock, while at the same time not serving as a source of liquidity for large blocks of stock for sale or for institutions to conduct short-term trading strategies.

Solution
On September 17, 2013, Westfield announced a 5% common stock repurchase through a Rule 10b5-1 share repurchase plan, which pre-authorizes the agent to purchase shares on behalf of the Company, including during traditional blackout or quiet periods.

Measures of Success
On March 12, 2014, Westfield announced its next share repurchase program, also via a Rule 10b5-1 Plan, for 10% of shares outstanding (a maximum of 1,970,000 shares). This new plan commenced in April 2014 after completion of the September 2013 Plan. Griffin Financial Group was once again chosen as exclusive repurchase agent for this Plan. 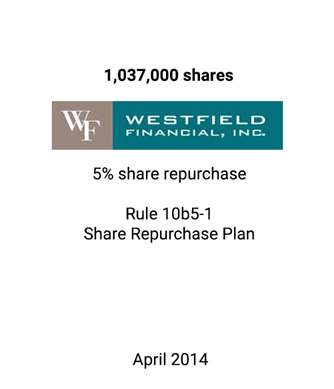