Company Overview
NP Precision, Inc. (referred to as “NPP” or the “Company”), headquartered in Folcroft, Pennsylvania, is a niche manufacturer specializing in the machining and assembly of high tolerance transmission, rotary and landing gear components for the Aerospace and Defense industry. The majority of NPP’s products are replacement components for CH-46 and CH-47 helicopters, as well as the F-16 jet fighter. The Company’s products are considered to be critical to the safe operation of the aircraft in which they are used, and as such, are subject to rigorous quality controls and quality reviews both in-house, and by the customer.

Situation
In the mid-2000s, NP Precision entered into a series of contracts to produce various aircraft parts for a customer within the U.S. government. These contracts quickly proved to be unprofitable, placing severe liquidity constraints on the Company as they continued to produce parts despite the losses incurred. While NPP was able to continue operations for several years through its operating cash flow generated by other contracts, the liquidity constraints resulted in multiple financial, operational and legal complications which reached a point in late 2014 where its senior creditor elected to seek liquidity.

Solution
NP Precision retained Griffin as its exclusive investment banker in the sale of all or substantially all of its assets to prospective buyers. Griffin ran an auction process and received offers from several buyers for varying combinations of the business’s operations and operating assets of the business. Griffin identified the highest value by combining two offers for two different subsets of the business, thus maximizing the liquidity available to repay the senior lender. The transaction was closed on December 30, 2014. 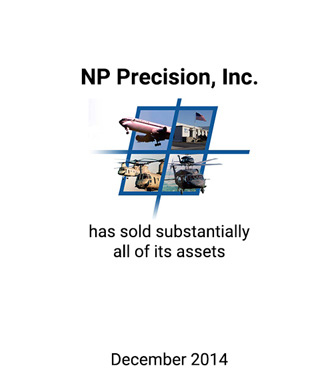