Solution
Consistent with Howard’s strategic decision to take advantage of the significant opportunities it saw in communities north of its birthplace in Howard County, Howard announced on October 17, 2014, that it entered into an agreement with the Federal Deposit Insurance Corporation (“FDIC”) to assume all of the deposits and purchase certain loans and other assets of NBRS Financial Bank (“NBRS”), a full-service, state-chartered commercial bank headquartered in Rising Sun, Maryland. NBRS operates two branches in Harford County, Maryland, in Aberdeen and Dublin; two in Cecil County in Elkton and Rising Sun; and one branch in Lancaster County, Pennsylvania, in Peach Bottom. With this transaction Howard Bank will now operate 13 branch offices, two regional offices and three mortgage centers in five Maryland counties and two states.

NBRS Financial Bank had approximately $188.2 million in total assets and $183.1 million in total deposits. In addition to assuming all of the deposits of NBRS Financial Bank, Howard Bank also agreed to acquire the majority of the NBRS Financial Bank assets. The FDIC will retain the other real estate owned and other remaining assets for later disposition. The FDIC estimates that the cost to the Deposit Insurance Fund (DIF) will be $24.3 million. In addition, Howard Bank has entered into an agreement with a third party to sell certain non-performing and other loans totaling approximately $18.4 million in the aggregate within 30 days.

Measures of Success
Griffin served as Howard’s exclusive financial advisor in this transaction which improves Howard’s size and scale and is expected to be immediately accretive to tangible book value and earnings per share. Additionally, it augments Howard’s recent expansion north into Harford County and provides entry into demographically attractive Cecil County, Maryland, and Lancaster County and Chester County, Pennsylvania.

For more information on this transaction, contact Stacey V. Weikel, Vice President, at 610.478.2015. 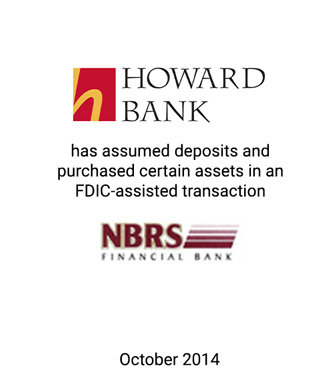 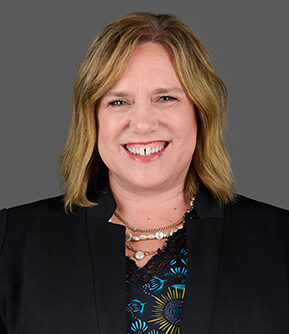