Howard Bancorp, Inc. (“Howard”), a $350 million community bank headquartered in Howard County, Maryland, successfully completed a capital raise of $10.2 million in common equity priced at 80% of tangible book value in a very difficult capital markets environment for community banks. Howard intends to use the proceeds to support organic growth and growth by merger and acquisition.

Led by a “big bank” management team, Howard is located in one of the wealthiest and fastest growing micro-markets in Maryland. Formed in 2004, Howard has a history of significant, profitable organic growth and had been successful in growing both its loan and deposit portfolios more than 10% annually through the financial crisis and recession, while maintaining superior asset quality.

With assistance from its financial advisor, Griffin Financial Group, Howard developed a unique plan to raise capital which may serve as a valuable precedent for community banks of Howard’s size. An institutional private placement of $4.2 million with two institutional investors, priced at $7.30 per share or 80% of December 31, 2011 tangible book value, provided a “smart money” endorsement of the bank and its management. Howard followed this institutional placement with a registered rights offering to existing shareholders at the same $7.30 per share pricing. This pricing was validated again as Howard’s management and board members purchased $2.0 million at $7.30. Concurrent with the rights offering, Howard offered for sale to members of the community (“friends and family”) and institutional investors, through Griffin, those shares that remained unsubscribed in the rights offering. Howard attracted an additional $4.0 million from existing shareholders, institutions and others in the public offering. 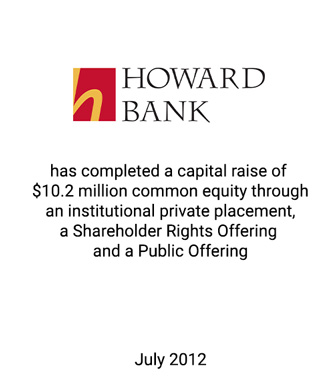