Griffin Serves as Exclusive Investment Banker to Carl R. Bieber, Inc., a Leading Transportation and Motorcoach Company in Connection With its Recapitalization

Company Overview
Carl R. Bieber, Inc. (“Bieber”), a Kutztown, Pennsylvania-based transportation and motorcoach company, services customers throughout the United States, but primarily in central and eastern Pennsylvania, New York City and New Jersey. The Company provides four distinct types of transportation service to the private and public sectors, including: A) scheduled line of daily runs to various locations throughout the Mid-Atlantic Region, including New York City; B) charter or group services to private customers, such as riders needing airport transfers, to corporate, civic, social, and school and university travelers; C) transportation for single- and multi-day tours, including (i) Broadway shows; (ii) beach, casino, dinner tours, holiday, shopping, sightseeing and other special events; (iii) sporting events, such as NASCAR, professional baseball, football and hockey; and D) corporate and personal limousine services. Bieber, one of the oldest motorcoach companies in the United States and the oldest in Southeastern PA, is privately owned and was founded in 1946.

Situation
Despite the difficult economic conditions, the Company’s existing business remained profitable and growth was consistent. However, as a result of the prolonged economic downturn, a constrained operating line of credit and meaningful capital spending needs, the Company faced a serious liquidity problem. Bieber engaged Griffin as its exclusive investment banker in order to seek a new lending partner which would replace and consolidate its existing senior credit facilities and provide it with increased liquidity and working capital to support its growth and capital needs.

Solution
Griffin managed a competitive capital raising process to replace the Company’s senior credit facilities. Griffin obtained multiple financing offers, negotiated terms with the prospective lenders, and was successful in securing financing collateralized by Bieber’s fixed and other assets, in order to satisfy its existing lenders and to provide the company with the ability to fund its growth and capital needs in the coming years. The Company ultimately selected Veritas Financial Partners as its senior lender for the transaction, and the transaction closed on May 1, 2014. 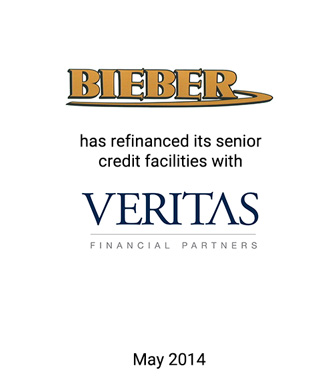