Company Overview
Architectural Window is a nationally recognized leader in designing, engineering, manufacturing and installing custom designed windows for high-end renovations and new construction based in Rutherford, NJ. The Company’s products are typically used in school systems and high rise residential buildings in the Mid-Atlantic and New England markets. All of the Company’s products are built based on highly customized designs to meet the unique architectural and performance specifications of each project using a variety of state-of-the-art in-house equipment and techniques.

Situation
As a result of the 2008/2009 economic downturn and subsequent contraction in the overall construction market, the Company experienced a decline in business and sustained losses from the onset of the recession through the first half of 2011. Backlog and pipeline did not recover to pre-recession levels until the second half of 2011. While the Company was able to generate positive EBITDA each month of 2012 leading up to October 29th, its facility sustained unexpected and unprecedented damage from Superstorm Sandy. The Company was forced to entirely shut down production for six weeks and production did not recover fully until well into 2013. While Architectural Window was able to restore profitability in the months following the storm, the combination of these two adverse events left the company in an overleveraged and liquidity-constrained position. Architectural Window engaged Griffin as its exclusive investment banker in order to seek a new lending partner which would replace its existing senior term and revolving credit facilities and provide it with increased liquidity and working capital to support its rapid growth through its recovery.

Solution
Griffin managed a competitive capital raising process to privately place the senior credit facilities. Griffin obtained multiple financing offers, negotiated terms with the prospective lenders, and was successful in securing financing collateralized by Architectural Window’s assets, along with a term and capex facilities in order to repay the existing lender in full and provide the company with the ability to fund its growth and capital needs in the coming years. The Company ultimately selected Santander Bank as its senior lender for the transaction, and the transaction closed on January 21, 2014. 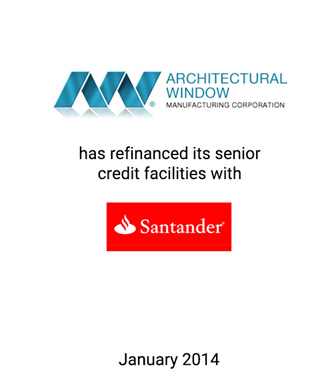