Situation
Once upon a time not too long ago when exit multiples were in the 2x – 3x range, Capital Crossing Bank was acquired by Lehman Brothers Bank in an all cash transaction. When it was sold, Capital Crossing was one of the best performing banks in the nation for more than a decade and its sale resulted in a 9x money return for its IPO investors.

Solution
After a successful fundraising effort from private equity sources, other institutional investors, family offices and high net worth individuals, Federal One, on May 4, 2010, completed its acquisition of Domestic Bank, a federally chartered thrift based in Rhode Island with approximately $234 million of assets, $200 million of deposits and 9 branch offices. Domestic Bank is now significantly over-capitalized and, led by Nick Lazares and an experienced management team, is positioned to execute its business plan and replicate the success of Capital Crossing.

Griffin’s Role
Griffin Financial served as placement agent for Federal One by assisting it in raising capital in connection with its acquisition of Domestic Bank.

For more information on this transaction, please contact Jeffrey A. Harenza, Managing Director, at 610.478.2158. 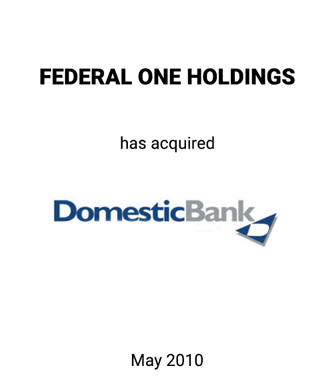