Company Overview
Northern State Bank in Closter, NJ, is a de novo bank with one branch with assets and deposits of $67 and $61 million respectively. As of June 30, 2010, Northern State had Tangible Common Equity of $3.4 million and Total Equity including TARP CPP Preferred Stock of $5.9 million and a Leverage ratio of 8.68%, Tier 1 Risk-based capital ratio of 10.8% and Risk Based Capital ratio of 12.09%.

Situation
Northern State’s Board of Directors and management engaged Griffin Financial Group to explore a substantial capital infusion to augment capital, improve the quality of capital, possibly repay TARP CPP and also provide for the bank’s growth initiatives, or a sale of the bank.

The investors agreed to invest up to $15 million in the common equity of Northern State Bank at a premium to adjusted book value which is essentially at book value on June 30, 2010. Legacy stockholders were permitted to purchase additional shares of common stock on the same terms as the new investors. The placement increased common equity capital by approximately 341%, providing ample common equity for growth and business initiatives. 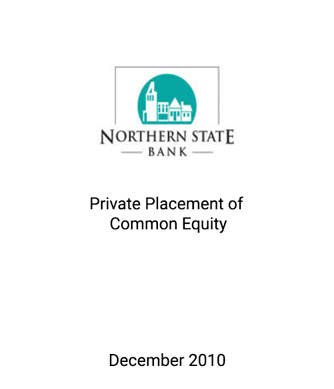