Griffin Serves as Advisor and Placement Agent to York Traditions Bank in Connection with its $10.0 Million Private Placement of Common Stock

Situation
York Traditions Bank, founded in 2002 in York, Pennsylvania, serves the greater central Pennsylvania market via five current and one pending branch locations. York caters to both the commercial and retail customer base with an innovative approach to banking that is built on traditional values and ties to the community.

York has experienced accelerating growth since 2012, driven by growing brand acceptance and a disruption to its market by way of post-recession M&A. York sought additional capital to support its growth, expansion plans and business pipeline.

Solution
York Traditions Bank engaged Griffin Financial Group to advise on and serve as placement agent to institutional investors. With Griffin’s assistance, York received substantial interest in the offering culminating in binding commitments to purchase an aggregate of 606,061 shares of its common stock for approximately $10.0 million, at a price of $16.50 per share, from well-known bank investors. The issuance price represented approximately 107% of pro forma tangible book value per share.

Following the negotiation of the private placement, each investor will own less than 9.9% of shares outstanding, and no investor will have a board seat, observation rights or registration rights. The transaction closed on September 28, 2017 and was priced at a 4.6% discount to market.

Measures of Success
On the heels of improving profitability, accelerating growth, accommodative capital markets, and the presence of a trading symbol (Pink: YRKB), York was able to raise an amount of capital in excess of its target from selected institutional investors in nine weeks.

The issuance of  $10.0 million of common equity arms York with an ability to capitalize on its accelerating growth trends, an increased lending limit and an ability to fund expansion and growth plans for the foreseeable future. 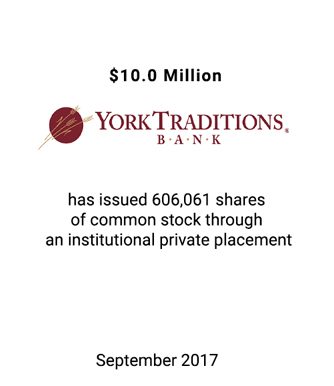