Company Overview
Magnatech International, Inc. and its related affiliate companies (collectively referred to as the “Company” or “Magnatech”), based in Robesonia, PA, are the leading manufacturers of capital equipment (machinery) used in the manufacturing of high and medium pressure reinforced hoses in the world. Magnatech’s machines are used in the process of applying a flexible, protective metal or fabric reinforcement on rubber hose and are sold to large international reinforced hose manufacturers. The resultant reinforced hose is primarily used in industrial and hydraulic applications such as construction, agricultural and mining equipment.

Magnatech is a market and brand leader within its niche, with the majority of its revenues coming from overseas companies, predominately from Asia. The Company’s depth and breadth of its product lines and its emphasis on engineering and research and development have assisted the Company in maintaining its market share leadership in the United States, Eastern Europe, Asia and South Africa.

Situation
Starting in 2008, the global economic meltdown affected almost all industries, including Magnatech’s. Due directly to the economic conditions present in the market and the resultant decline in the Company’s revenue, EBITDA, and backlog and significant overcapacity in its end markets, the Company faced significant liquidity and Lender pressures.

Because of these pressures, Magnatech’s Board sought to recapitalize the Company via a liquidity event. As a result, the Company’s Board retained Griffin as exclusive financial advisor to assist it in a sale of the Company’s assets. Griffin’s role included assisting Magnatech in commencing and executing a full sale process, which resulted in multiple third-party offers. As a result of this process, Griffin was able to structure and negotiate an acceptable deal between the Lenders and a new investor group giving the Buyers free and clear ownership and allowing the Company’s Board to fulfill its Lender obligations at market value. Griffin was also able to introduce the Company to a new Lender that was able to replace the Company’s existing Letters of Credit to support state bonds which were in place and to provide working capital. 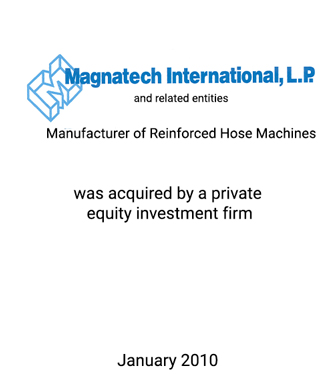