Situation
Nodak did not need capital to fund organic growth. It had made several small acquisitions, but management felt larger acquisitions would strain capital. However, growth through acquisitions was a key strategic objective of Nodak, and management believed that access to capital was critical to achieving this goal. Griffin presented at the Nodak 2012 board retreat on Nodak’s strategic alternatives. One of the conclusions of this presentation was that the laws of North Dakota were not conducive to capital formation by mutual insurance companies. In 2014, Griffin again presented at Nodak’s board retreat to discuss strategic options, including specifically enacting subscription rights legislation in North Dakota to permit mutual insurance companies to more efficiently raise capital. Nodak, with the assistance of Griffin, successfully secured the passage of subscription rights legislation in 2015. A unique feature of this legislation is that it gives policyholders the right to purchase stock or redeem their subscription rights for cash.

Under the plan of mutual holding conversion adopted by Nodak, the company was required to be independently appraised and raise capital in an amount equal to 45% of the appraised value. The independent appraisal was $200 million and the 45% offering range was $76.5 million to $103.5 million, with a midpoint of $90 million. Griffin received $251 million in orders. The offering was closed at the top of the appraisal range of $103.5 million; 10,350,000 shares were issued to policyholders and the public at $10 per share. In addition, policyholders who elected to redeem their subscription rights rather than purchase stock received cash distributions totaling $5.7 million.

This transaction represents the first ever subscription rights conversion by a mutual holding company and the first conversion of any kind in which the mutual members could redeem their subscription rights for cash. The transaction closed on March 13, 2017, and commenced trading on Nasdaq on March 16, 2017 under the symbol NODK. Nodak is now poised to seize growth opportunities. 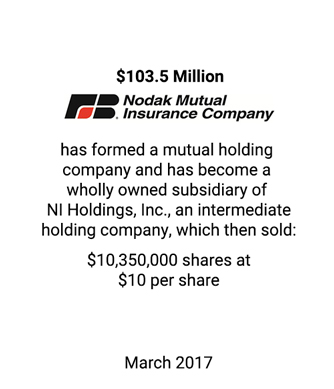 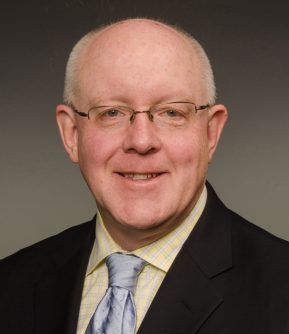