The Company, which had recorded a profit since its inception in 2002, experienced severe financial losses in FY2011 primarily as a result of adverse developments with respect to three projects in its California operation which resulted in three under-bid contracts and job losses of over $3.2 million. Separately, the Company recorded $2.4 million of non-recurring charges related to accounts receivable, inventory and other accruals. These factors combined to cause WPCS to breach certain financial covenants under its existing senior credit facility with its Lender and the Company decided to pursue a refinancing.

WPCS engaged Griffin as its exclusive investment banker to refinance its existing senior credit facility. Through its relationships with lenders and Griffin’s competitive process, Griffin raised the capital necessary for WPCS to refinance its debt on very favorable rates and terms. 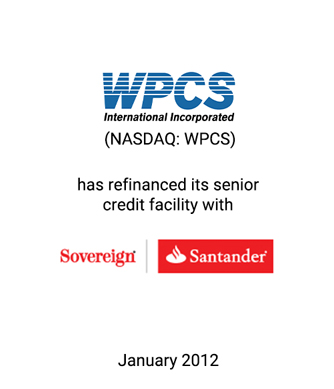