Overview
Founded in 1969, RETTEW is an industry-leading engineering consulting firm headquartered in Lancaster, PA. With more than 350 professionals located in 11 offices throughout the country, RETTEW provides nearly 600 services – engineering, environmental, surveying, planning, safety and related technical services – to a wide range of industries. The company implemented and grew its employee stock ownership plan (ESOP) over the last seven years, and until recently, the ESOP owned 30 percent of the company and 25 shareholders owned the remainder.

Situation
The founding shareholder of RETTEW Associates, Inc. (“RAI”) owned a very large block of shares, and an ESOP owned approximately 30 percent of the company’s stock. The board and management struggled with the most efficient mechanism to buy out the founder.

In addition, an affiliated company — RETTEW Field Services, Inc. (“RFS”) — was owned by similar shareholders, but the ESOP did not have an ownership stake in RFS. The board and management wanted to determine whether it made sense to bring RFS under the RETTEW umbrella.

In addition, the analysis also covered a sale of all RAI stock, including that of the founder, to the ESOP and a sale of the RFS shareholders’ stock to a newly created holding company that could own both RAI and RFS.

Following this strategic and extensive examination of possible options, SES and Griffin professionals consulted with the board and management on the most efficient structure. SES and Griffin professionals helped to educate the shareholders about the options and then guided the company through implementing a transaction where all of the stock in RAI (owned by the founder as well as the other individual owners) was sold to the ESOP, a new holding company was formed to own RAI and all of the shareholders’ stock in RFS was sold to the holding company. This created a more diversified and tax-efficient holding company structure, and RETTEW transitioned from a C Corporation to an S Corporation, effectively exempting it from state and federal taxes.

With the transition successfully concluding on January 2, 2019, the company celebrated dual milestones – 50 years in business and a 100 percent ESOP-owned company.

“RETTEW is successful because of our employees, and we have always strived to maintain an employee-focused culture,” said Mark Lauriello, President and CEO. “Transitioning to a 100 percent ESOP-owned company serves to reward our employees for their dedication and also benefits the company as a whole and we are grateful to SES ESOP Strategies and Griffin Financial Group for helping us explore all avenues and make the best choice based on our unique circumstances.”

For more information on this transaction, please contact Mark B. Russell, Head of the ESOP Group, at 610.478.2166. 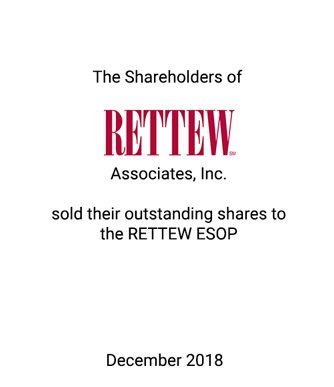