Situation
VIST Financial Corp. (NASDAQ: VIST) has $1.3 billion in assets, is based in Wyomissing, PA, and has 20 locations in eastern Pennsylvania, including the Philadelphia suburbs. At December 31, 2009, VIST’s ratio of NPAs plus 90 days past due / total assets was 2.94%, its allowance / NPAs + 90 was 29.8%, its TCE/TA was 4.60%, and its stock price closed at $5.25 per share – approximately 52% of stated TBV. VIST’s reserve and capital levels appeared light compared to its level of NPAs, but VIST steadfastly maintained that its reserves and capital were adequate because of its conservative underwriting, the collateral levels supporting its loan portfolio and recent appraisals. VIST was unwilling to access the public markets at a substantial discount to TBV, especially given the drop in stock price – measured 10 days before and 10 days after the pricing – experienced by most of the banks in Pennsylvania who accessed the market in 2009 and YTD 2010.

Solution
The VIST Board engaged Griffin Financial Group to explore a capital infusion by bank savvy institutional investors to serve as a “smart money” endorsement of its asset quality, reserve coverage, capital levels and earnings power. Griffin ran a competitive process resulting in the placement by VIST of 644,000 common shares representing 9.9% of VIST’s pro forma shares outstanding with two 4.9% institutional investors at $8.00 per share. The placement is expected to be slightly accretive to TBV per share and slightly dilutive to EPS by the end of 2010. The process was directed at institutional investors, private equity firms and larger banks which might have an interest in a minority investment in a bank. The placement was oversubscribed by 600,000 to 900,000 shares at $8.00 per share, but VIST declined to close on these incremental shares because it viewed its reserves and capital as adequate and was unwilling to accept the additional EPS and TBV dilution.

Market Data
The 10 day prior average closing price of VIST’s common stock at the date of Griffin’s engagement was approximately $5.70 per share, or 57% of stated TBV. Three trading days after the announcement of the infusion, VIST’s stock closed at $9.40 or 96% of pro forma TBV. 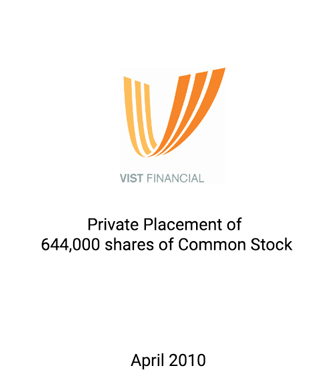 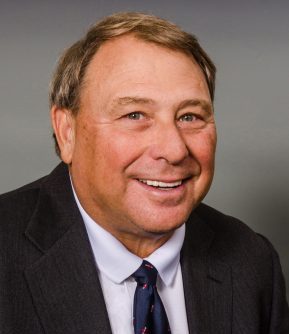