Solution
Sterling’s Board engaged Griffin Financial Group to explore a substantial capital infusion or sale. Griffin ran a competitive process, resulting in the announced merger between Sterling and Roma Financial Corporation (NASDAQ: ROMA), a $1.31 billion asset, 15 branch thrift based in Robbinsville, NJ. At December 31, 2009, Roma’s NPAs plus 90 days past due as a percentage of total assets were 1.32% and TCE/TA was 16.44%. 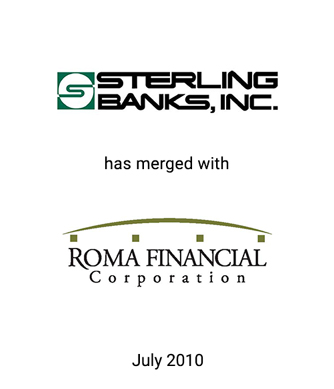