Situation
Spectrum was formed in 2001 and operated successfully for several years with various successfully executed commercial real estate development projects and acquisitions. The Company’s portfolio reached its peak of 12 properties (plus several land holdings)  in 2008, but suffered from the loss of several key tenants and the general decline in commercial real estate values during the 2008/2009 economic downturn. The recovery of the commercial real estate market in Spectrum’s local region, following the recession, lagged other parts of the country, which caused leasing and property values to remain weak for a longer period than anticipated by Spectrum’s management team. In addition, Spectrum held an inventory of undeveloped land which became a cash flow burden as development was not feasible and Spectrum was unable to economically dispose of the properties. In order to fund operating cash flow during this period, Spectrum sold or refinanced core assets and obtained subordinated debt from various sources. Despite positive trends in property values and leasing activity in 2016 and 2017, the strain of the additional debt on a reduced number of assets, along with the loss of two key development projects that were poised to proceed, caused management to seek a restructuring solution.

Solution
Spectrum engaged Griffin in late 2016 to examine the possibility of restructuring the Company’s portfolio outside of Chapter 11. After a detailed analysis of the Company’s complex capital structure, asset values and expected future cash flows, Griffin approached the market to seek proposals for refinancing/restructuring Spectrum’s $35 million of subordinated debt and also to spin off the Company’s undeveloped land into a separate fund. Multiple offers were received, but the large number of constituents involved ultimately made it impossible to reach a solution outside of court. Spectrum filed a Chapter 11 bankruptcy proceeding in June 2017 and, once the restructuring appeared infeasible, began to approach buyers for its assets pursuant to section 363 of the Bankruptcy Code. Griffin administered the Section 363 sale process and auction, which resulted in a highest and best bid from Black Diamond Capital Management, LLC valuing the five core developed properties at approximately $64 million. That primary sale closed in March 2018.  Several of the smaller assets were disposed of in smaller transaction a few months later. 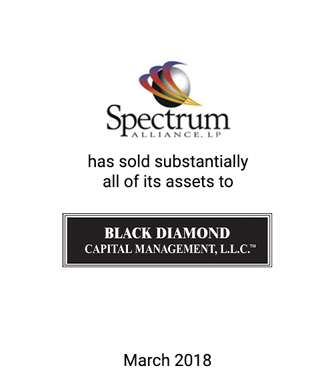