Company Overview
Sno Mountain, L.P., debtor-in-possession (referred to as “Sno” or the “Debtor”), was a major recreational destination in Scranton, Pennsylvania. Sno offered skiing, snowboarding and snow tubing with the largest area of skiable terrain in the region, second highest vertical drop, 100% snow making coverage and adequate facilities and lift equipment to accommodate guests. Sno also owned and operated a waterpark which had experienced steady growth and generates additional revenue during the non-winter months.

Situation
During the winter of 2011 and 2012, unseasonably warm weather resulted in an industry wide downturn in skier turnout. Reduced winter attendance levels, combined with the high amount of investment in equipment and start-up costs at Sno Cove, resulted in constraints on liquidity and an inability to meet its financial obligations and debt payments. On October 15, 2012, certain creditors filed an involuntary petition against Sno under Chapter 11 in the United States Bankruptcy Code in the Eastern District of Pennsylvania. The Debtor agreed to convert the case to a voluntary petition and a Chapter 11 Trustee was appointed. The Debtor subsequently commenced a sale of all or substantially all of the Debtor’s assets pursuant to section 363 of the Bankruptcy Code.

Solution
An investor group, comprised of certain former investors of Sno and new investors, retained Griffin as its exclusive investment banker to raise necessary capital to purchase substantially all of the assets of the Debtor. Griffin acted as exclusive investment banker to the investor group (known as Montage Mountain L.P.) in its pursuit and successful acquisition of Sno. The transaction closed on May 10, 2013. 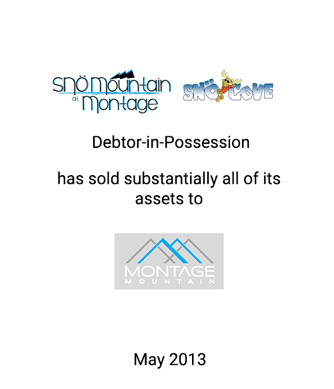