The Company
Lynch Exhibits, Inc. (“Lynch”) is engaged in the design and fabrication of trade show exhibits, permanent displays/environments, and point of purchase exhibits. In addition to its products, Lynch provides a full range of services to customers, which include storage of existing exhibits and displays, coordinating and supervising logistics, assembly/disassembly, and routine maintenance/troubleshooting. Lynch’s customers include large, multi-national brands in the consumer electronics and pharmaceutical industries, among others. The Company is headquartered in Burlington, NJ, with an additional location in Las Vegas, NV.

Situation
As a result of prolonged economic downturn and a contraction of spending from corporate clients, Lynch suffered from constrained liquidity and excessive leverage. After addressing and improving the Company’s operational structure, which included optimizing facilities and overhead, management was able to rebuild the business and take advantage of improving economic conditions. However, the resulting leverage from the downturn left the Company with the need to replace their existing senior lending partner. Management hired Griffin as their exclusive investment banker in order to facilitate this transaction. 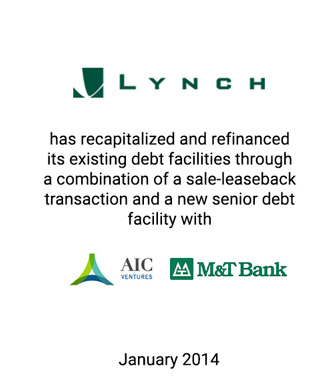