Griffin Advises First Bank of Delaware in Connection With its Sale of Branches, Loans and Deposits

First Bank of Delaware, a publicly traded NASDAQ company (ticker symbol: FBOD), is a 13-year old bank with two retail branches and assets of $257 million as of December 2011.

First Bank of Delaware historically enjoyed very strong profitability. In December 2011, the Bank received a Consent Order from the FDIC, which required it to either take a series of actions regarding its non-traditional financial intermediary businesses and its future operations and operating plans and policies, or submit a plan to the FDIC by March of 2012 which would provide for the Bank to pay off, transfer and/or dispose all of its liabilities on or before December 31, 2012.

The Bank was faced with the difficult choice of materially changing its legacy business model, with uncertain prospects for future success as a small community bank in a difficult economic environment, or commence a process which would result in winding down its operations as a bank.

First Bank of Delaware engaged Griffin to assist management and the Board of Directors in addressing certain components of its Consent Order and to serve as its exclusive financial and strategic advisor in connection with a sales transaction. The Bank also engaged Stevens & Lee as its legal counsel for regulatory and general corporate matters.

In less than four months, Griffin and Stevens & Lee teams were able to assist the Bank in preparing an Offering Memorandum, conduct a thorough marketing process, work through due diligence issues, and draft, negotiate and execute a definitive agreement for the sale of substantially all of the Bank’s loans and deposits (“the Transaction”).

On May 2, 2012, First Bank of Delaware announced that it had entered into an agreement with Bryn Mawr Trust for the sale of a majority of its loans and deposits and had submitted a plan to the FDIC which provides for the wind-down of the operations of the bank by December 31, 2012. The Transaction is subject to regulatory and stockholder approval.

Griffin provided an opinion to the Board of directors of First Bank of Delaware with respect to the fairness of the consideration paid in the Transaction.

For more information on this transaction, please contact David W. Swartz, Chair of the Banking Group at Stevens & Lee, at 610.478.2184. 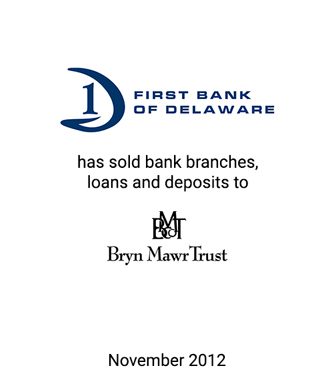