East River Bank, headquartered in Philadelphia, Pennsylvania, is a privately held community bank established in 2006 with three branches in Philadelphia.

On April 4, 2016,  DNB Financial Corporation, based in Downingtown, Pennsylvania, announced its intention to acquire East River Bank. Under the terms of the agreement, East River shareholders will elect to receive either 0.6562 of a DNB common share or $18.65 in cash for each outstanding East River common share, subject to proration such that approximately 85% of the currently outstanding shares are exchanged for stock. As of the close of business on April 1, 2016, the aggregate acquisition price equaled approximately $49.0 million, or approximately 161% of East River’s tangible book value at December 31, 2016, which is among the highest reported prices received nationwide in recent years in sales of banks having less than $500 million in total assets. This pricing is reflective of East River’s strong growth and earnings, as the transaction is projected to be immediately accretive to earnings with an IRR in excess of 18% for the combined company.

The transaction was completed on October 1, 2016. 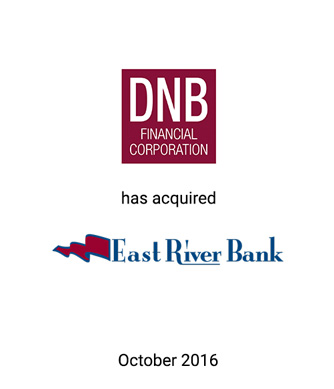